The Pooka, or in Irish Puca, (goblin) is a phantom fairy creature that features in Celtic folklore and fairytales of Ireland.

A similar fairy entity appears in mythology of Scotland, Wales, Cornwall, Channel Islands and Brittany. Often thought of as an animal spirit, some accounts believe it gets its name from Poc, meaning he-goat in Irish. In fact Pooka is a changeling, and can take animal or human form; like a horse, donkey, cat, dog, bull, young man or even a voluptuous young woman. The animal Pooka is usually jet black with fiery golden or red eyes. Some associate it with devil!

The mountains and hills are this creature’s domain. Known for its cunning and wile as well as lies and deception, Pooka’s archetype is trickster. 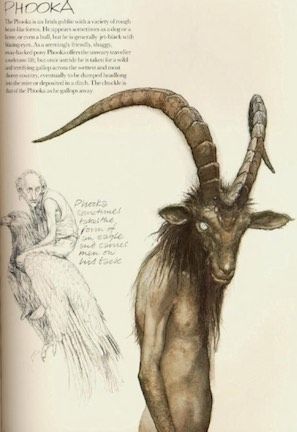 November is the month of Pooka. In Ireland of past, at Halloween, many children went out “with Pooka”. Halloween was also the time when witches, warlocks, and fairies enjoyed revels. In Irish and Scottish folklore there was also the Phooka.

Mainly associated with Samhain (31st Oct), it is November 1st that is also considered Pookas Day. This coincides with the harvest and the traditional customs that when the harvest is being brought in the reaper must leave a few stalks behind. This is called the Pookas share and must be left to appease the Pooka for one would not like to incur his wrath.

It is said that when we see the rain falling on a sunny day, the Púca will definitely be out and about that night.

They have the power of human speech and when inclined make great sport of those they talk to as they like to embellish the truth.

Often seen on Samhain, it should be treated with utmost courtesy, lest you be tossed onto it’s back and subjected to a terrifying ride through the night.

We can say that Halloween is the marking of an important crossroads, into winter, and into darker nights.

In Celtic mythology, this dayworld shift is mirrored by another cross-roads, a time when the waking world and the Otherworld, the realm of the dead, intersect and so Halloween was also known as Puca Night.

Pookas would watch over graveyards and would punish those who disrespected the dead. Sometimes Pookas could be felt but not seen, and would move about town causing mishaps.  They also sometimes appeared as humans with animal features.

Pucas are the things of nightmare; wild, eerie boogeymen. Being a creature not of this world, the púca was dreaded during Halloween. It could only be relied on to behave properly on November 1 and travellers were safe from its ministrations. However, like the devil, it had a habit of spitting on berries and fruits, making them unsafe to eat after November.

The Púca festival will take place this year in Ireland’s Ancient East from 31 October to 2 November. It will make Ireland the place to be this Halloween, and it is expected that visitors from around the world will come and celebrate the country’s ancient traditions.

In Witchcraft and magical herbalism, corn is generally used to draw things to you. Candy corn is the perfect ingredient for a spell to draw a little something into your life.

On or before Samhain, when the moon is waxing and almost full, sit in a quiet place, meditate on what you desire, envision the feelings you would feel if you already had your goal.

When you have that feeling, start writing your desire on the paper.

Hold the candy corn, bless it and call on it to draw ___. Place them in the jar.

Hold your bottle of apple juice and bless it. Call on its connection and pour some in the jar.

Bless the herbs you have chosen and add.

Add your own hair or nail clippings to connect you.

Close the jar tightly.
Bless it and announce, “This drawing jar is now complete and will clear obstacles between me and ___”.

To activate the jar, shake it. You can leave it on your altar, or somewhere in your home. Shake it often—as you’re walking by, before bed, when you wake up. The shaking gets the jar’s energy moving and working for you.

If you feel you are being plagued by some spirit or energy, or want to rid something or someone, try this during the Samhain season to protect your home and send it/them away.

One thought on “Puca Night And The Legend Of Phooka”