Today, In Celtic lore, is a festival of Tan Hill, or, otherwise known as Teinne, who is their deity of fire. A huge bonfire would be lit and then all who attended would light the fires in their own homes from the flames.

The main communal point of the bonfires at Lughnasad, and at the other great Celtic seasonal feasts was to unify the clan. Before they gathered at the cone of logs and branches, all the villagers extinguished their hearth fires and all other lights, then doused their torches so that the village would be in total darkness as the ceremony began. When the fire ceremony ended,  all the families would light their torches from the sacred fire, so that when they relit their hearth fires all would be sharing fire from the same source. This sacred fire, called the Teinne or Tan, gave its name to the Tan Hill festival, the best known of the countless communal fire rituals performed by the Celts in the first week of August.

Tan means fire, and the date of the fair falls at the very time of year when fire worshipers are known to have celebrated their rites on hills. The night before, all the fires in the country were extinguished and next morning the materials for exciting the sacred fire were prepared and set alight by friction of wood, and the resulting fire was attributed to heaven and esteemed preservative against bad luck and disease. 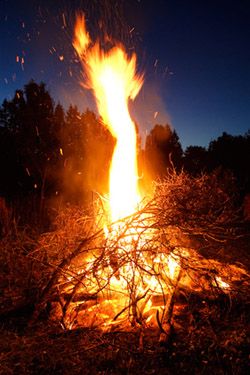 Fires lit upon Tan Hill could be seen for miles around, thus rendering it a peculiarly suitable place for those heathen ceremonies, and where crowds assembled regularly at certain seasons.

Celtic folklore, the dance of the Moon, celebrating the sacred cycles of the earth…..especially  Lughnasad, marked the close of the sun’s contest with the powers of darkness. It was a great event!

This is traditionally the time when the power of the god wanes as the goddess waxes, and this transition is symbolized in the zodiac by the fading solar energy of Leo yielding to the fertility of Virgo, bearer of grain, grapes, and the harvest.

Before the waning of the light, and days that get shorter toward autumn and December, the point is to celebrate the fire, in its power and purity, illuminating majesty, and especially in the mysterious way it has of drawing communities together as nothing else ever does.

This is why Lughnasad was always a time for a grand bonfire. The ancient meaning of this ritual has been almost completely lost, and today few people know that the bon in bonfire comes from “bone.”

Ancient cultures added pieces of bone to their fire to honor and thank again, the food and animals who have given their lives to nourish the people. This must be done now, as the next Hunter’s Moon may come in October, and Lughnasad may offer the last opportunity before Samhain to ask permission and blessing from the animals who give their lives in the next great hunt so that the human community may go on.

Perhaps it all started with warmth and light in the darkness but it has lead to many diverse celebrations. Providing bonfires was a mark of status and partaking of them was a delight of the people. First they may have been gifts of the powerful to the powerless. Later they were taken over by the ancient religion to mark the seasons and clean up bad weeds and infected plants and to clean livestock.

Harness some of the Corn Moon’s fiery energy for your ritual and spell work. This is a good time to focus on your spiritual and physical health. It’s the time to harvest what you can now to put aside for later use. What sacrifices can you make today that will benefit you further down the road?