Crystals are used in so many things in everyday life. They are used in stoplights, computers, radios, the space shuttle and so many other things.

They are mothere nature’s batteries that can be used to energize almost anything.

From as far back as the days of the legendary lost city of Atlantis, through the ancient Mayan and Hebrew civilizations, and including Far Eastern and Native American cultures, crystals and gemstones have been used both in spiritual rituals and as aids to physical healing.

The first historical references to the use of crystals come from ancient the Ancient Sumerians, who included crystals in magic formulas. The Ancient Egyptians used lapis lazuli, turquoise, carnelian, emerald and clear quartz in their jewelry.

The Ancient Greeks attributed a number of properties to crystals and many names we use today are of Greek origin. The word ‘crystal’ comes from the Greek word for ice, as it was believed that clear quartz was water that had frozen so deeply that it would always remain solid. The word amethyst means ‘not drunken’ and was worn as an amulet to prevent both drunkenness and hangovers. Hematite comes from the word for blood, because of the red coloration produced when it oxidizes. Hematite is an iron ore and the ancient Greeks associated iron with Aries, the god of war. Greek soldiers would rub hematite over their bodies before battle, purportedly to make themselves invulnerable. Greek sailors also wore a variety of amulets to keep them safe at sea.

You can use them to energize your plants and make them grow stronger and more happy. You can also use them to nurse sick plants back to health.

They can help you connect with your higher self.

Quartz also has the ability to transform an imbalanced energy field. When you feel stressed the crystal can balance your energies and revitalize you.

You and everything else in this world are made up of electromagnetic energy. By holding a crystal your electrical impulses interact with the crystal. The crystal begins to vibrate and the energy it creates can be transmitted to your own internal energy circuits.

In Magic, crystals can be used to enhance your spells. You can place them on your altar, as I have many on mine. These crystals on your altar will act as beacons of Light sending out the sympathetic vibrations that you wish to manifest into the physical world.

It helps one to clear their mind and focus on what is needed.

Crystals emit negative ions which create harmonious and uplifting feelings. Crystals can be used as a personal tool for transformation as they can be used to store, amplify, transmit and focus our thoughts, desires and emotions, assisting manifesting them into reality. 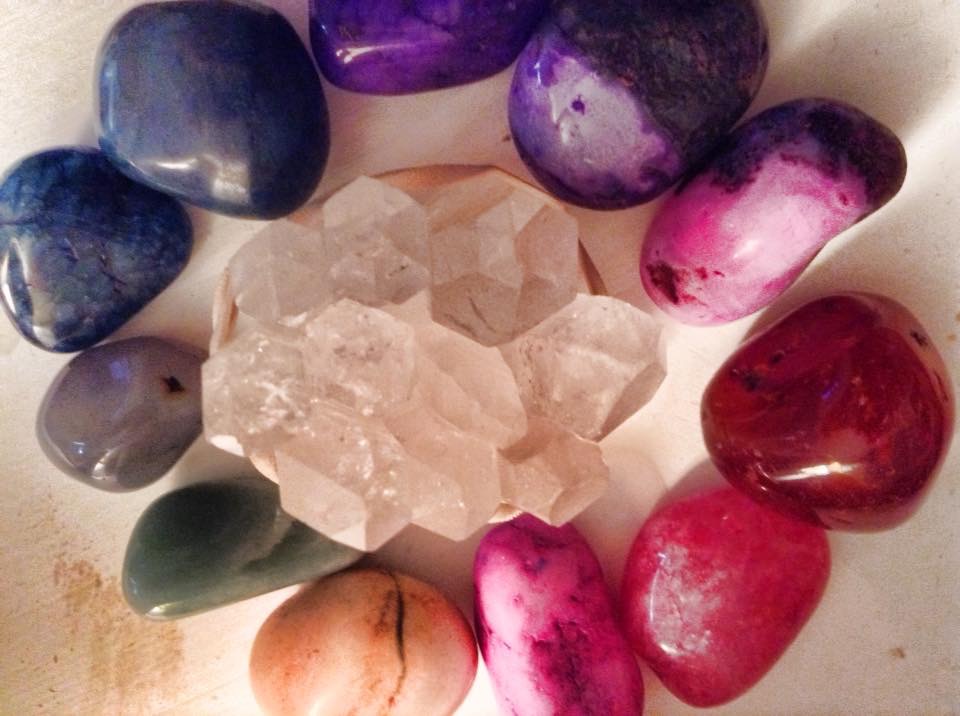 This divination uses the colors of stones to provide clues regarding the future. You will need seven stones, one of each color. Place these in a soft cloth bag, and, when you need guidance, select a stone at random from the bag. It may answer your questions. If not, take another stone and ‘read’ or interpret them together.