A pandemic (from Greek pan “all” and demos “people”) is a dis ease spread across a large region.

After experiencing firsthand the checklist I never thought I would have lived…….
✔️empty shelves….no paper products, or water, or canned goods , in 3 STORES !!!!!!
✔️people in line before store opened… like we’re all waiting for new I phone, but for FOOD….. lol
✔️rain that just waited til we were in the crazy line outside to literally POUR
✔️police at the Walmart due to a fight!!!
✔️the local news were here
✔️a million people and only 2 checkers at Vons

It was then I realized, we are all Pan’s people… and when I decided to laugh at adversity instead of weeping in my coffee….I looked closer…..

Pan embodies many of the qualities of the world over which he ruled. He is depicted as energetic, sometimes frightening, with the wild, unbridled creative force of nature.
Pan is the spirit of corners, thresholds, borders, and edges. He is most likely seen at twilight at the edge of the woods from the corner of your eye.

The word panic ultimately derives from the god’s name.

Pan possessed enormous strength. He could also run for long periods of time and was impervious to injury.

I can’t help thinking he is the perfect relief and example for the unrest right now.
His lessons would be about learning how to navigate the crazy seasons in life without losing your mind.
He would laugh in the face of danger.
Keeping our head in time of crazy.
The God Pan would laugh at chaos.
The book Laughing Gods gave me assurance.
Pan is the spirit of wild, irrepressible life essence.
He is also a war god. He helped win the war against the Titans, as well as the war against the Persians, for the Athens.
In Classical Mythology, he is the original bad boy.
He’s also considered a healer of epidemics through cures revealed in dreams, and an oracle-god.
Feeling completely overwhelmed I

realized I needed to take a step back. Some stress can be a good thing, but too much can effect us emotionally and physically.

Don’t dwell on the big picture.

Take one day at a time.

Make yourself a priority.

Come to us who gather below

When the broad white moon is climbing slow

Through the stars to the heavens height

We hear thy hoofs on the wind of night

By joy and terror we know thee nigh

We speak the spell thy power unlocks

At Solstice, Sabbat, and Equinox

Word of virtue the veil to rend

From primal dawn to the wide world’s end

The blessing of Pan! 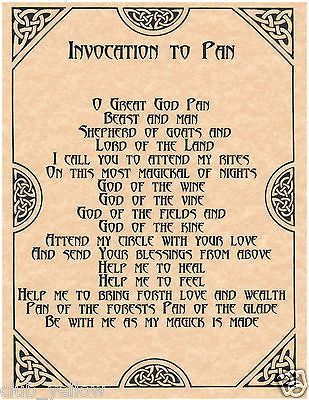